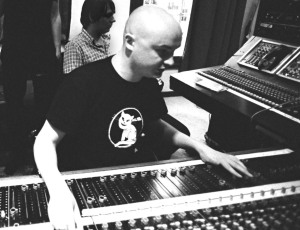 Julian began his career running the Soho Studio for renowned film/ad Director Tony Kaye (‘American History X’) – a role he held for 2 years. It was during this time and over a succession of projects that Julian first developed a taste for working to picture.  Making a move into popular music production, (which has seen him work with artists such as Ed Sheeran, Vashti Bunyan, Albert Lee, Guillemots, Midlake … see Julian’s production page and showreel here), Julian has continued to produce, mix and compose bespoke music for broadcast on stations including BBC, ITV and Channel 4.  Most recently he has composed and produced the score for short film ‘Elipse’ (Collectif Fact) and produced, recorded and mixed the score for the Grierson award winning ‘Our Gay Wedding: The Musical’ for composer Benjamin Till (C4/Wingspan). The coming year will see Julian extend his regular pop recording collaborations with arranger, composer and violinist Fiona Brice into projects that require music to picture.

Music Julian has co-written and/or produced for other artists meanwhile has been featured in film, TV shows and video games such as ‘Made in Chelsea’ (C4), ‘The Hour’ (STV), ‘MTV The Real World’, ‘Bones’ (21st Century Fox), ‘Couples Therapy’ (MTV) and ‘Jukebeat’ (Konami).

Julian has worked out of many of London’s top recording studios including RAK, Abbey Road, Mayfair and Assault & Battery. Julian’s principal base for work is DIN in Finsbury Park (North London), combining the pinnacle in front end analogue gear (Neve/API/SSL/Urei) with the convenience and speed of a highly spec’d ProTools rig. Additionally DIN also has a massive collection of vintage and modern instruments that Julian has collected over the years (email for info).

Julian has a 1st. class degree in Popular Music  from Leeds University (BA) and is a highly trained and experienced musician. He has lent his performance skills to many records and regularly works as a producer with some of the most accomplished pop and classical musicians in London.