Despite the less than enticing weather in London Town of late it’s been an exciting summer round these parts so far. We have lots of new and soon to be revealed projects on the go and a host of brilliant things that the lovely people we work with have been (and are) up to. An incomplete outline of current/recent projects for our clients reads as follows:

Another lovely write up for The Shutes … this time in Music Week … as produced/mixed by Julian Simmons. 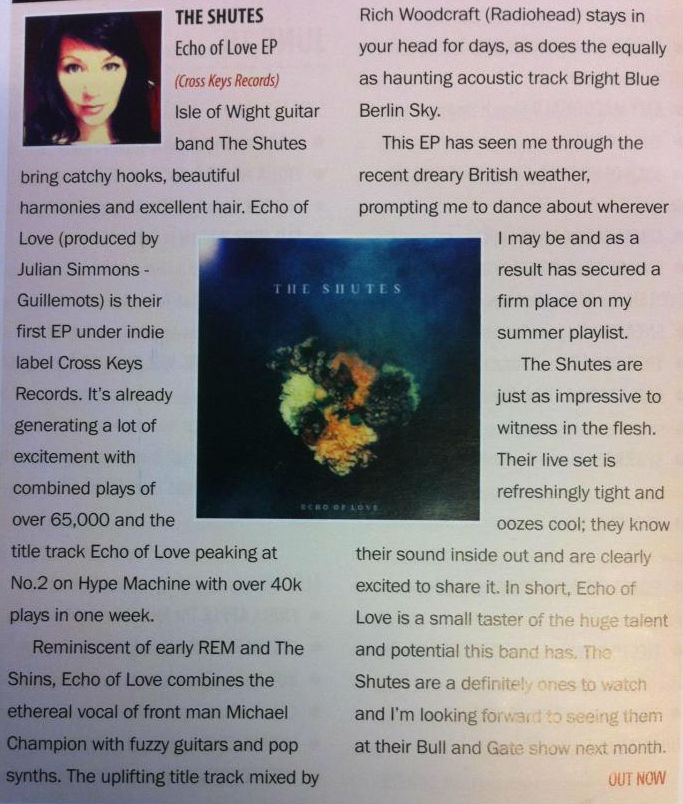 Posted on May 1, 2012 by Jude Street Management

Echo Of Love EP by The Shutes

The release date for the new EP by The Shutes – as Produced/Recorded/Mixed by Julian Simmons – has been announced by Cross Keys Records (link here) and is due out April 2nd. Lead track ‘Echo Of Love’ also receives its first airing and is featured in this weeks NME Buzz (link here) and in the NME new music blog.

Check out the video to the track here:

Download The Pirate Bay in 90mb (The Next Web)

Will the wonders of the internet ever cease?
Download The Pirate Bay in 90mb
(Link to article on thenextweb.com)

Cybercrime + The Indie Musician In 2012

When it comes to cybercrime in 2012, social media networks and mobile payment tech are amongst the weakest links according to a new study by Sophos. (Link here). This might not sound like much of a concern for the Apple addicted music community but the story does not stop there. As more and more businesses turn to MAC OS over windows, an increased propensity to develop Apple foxing malware is likely to become the norm for many ‘hacktivists’. This clearly represents a risk for all MAC users, but in the case of the independent musician it’s one that we would argue could be particularly acute. With more and more recordings existing solely in digital form (often on just one hard drive), the potential damage that a new wave of MAC OS focused cybercrime could do to an already drastically diminished marketplace is one that must be countered as stringently as possible.

So to all you indie musician types out there here’s the message – stay alert, stay aware and back up daily to an external HDD for *!?*^ sake!